Good day, book people. I’ve recently noticed that I’m perfectly willing to suspend my belief and rational thought (to a certain extent) when reading fantasy, sci-fi, paranormal, fantasy, or even romance stories. However, when I’m reading mysteries, suspense, thrillers, and even romantic suspense, I want the stories and characters to be wholly realistic and the action to be credible. If the story is too far outside of my brain’s comfort zone, I have a hard time enjoying the story. I know, strange reading quirk, but there you have it. Today, I’m pleased to welcome C.L. Tolbert, author of Sanctuary, part of the Thornton Mystery series, back to the blog. Ms. Tolbert will discuss the importance of “keeping it real” or realistic fiction. I hope you’ll enjoy what she has to share, follow along with the tour to learn more about this book and its author, and don’t forget to grab yourself a copy of Sanctuary for your fall reading. Thank you, Ms. Tolbert, for your visit, the blog is now all yours.

Keeping It Real
by C.L. Tolbert

I’ve always preferred realistic fiction. I like to emerge myself in the setting and the characters’ lives, and for me, that means the story must be credible. The reader must believe that what unfolds in the story could actually happen. Even though it was non-fiction, Truman Capote’s In Cold Blood, which may be the best true crime story ever written, is an icon and a guide for what I’d like to achieve in a story.

But are mysteries realistic fiction? The short answer is, they don’t have to be. Mysteries can be fictional or nonfictional, and may even include supernatural topics, such as Sir Arthur Conan Doyle’s The Hound of the Baskervilles.

When I was five years old, my favorite TV show was Perry Mason, with Raymond Burr. My parents didn’t allow me to see it, which made it even more tantalizing, but my aunt did when she babysat my brother and me. I was impressed with Mason’s smooth approach, his brilliance in the courtroom, and the fact that, even though he usually represented the underdog or the disadvantaged, he always won.

But even though I enjoyed the intricate plot lines on the show, I knew, even at age five, that courtroom confessions, which Mason often relied on to win, seemed unlikely. I didn’t know the name for this anomaly when I was five, but it was my first confrontation with “deus ex machina,” a plot device where an unsolvable problem in a storyline is suddenly and abruptly resolved by an unexpected and unlikely occurrence, such as the sudden confession. Even then, I wanted the facts and structure of the story to be realistic, not contrived.

Perry Mason also had a couple of sidekicks, one of which was Paul Draper, his intrepid private investigator. Paul didn’t hesitate to rough up witnesses so that they would ‘spill the beans.’ After a few years of watching Drake misbehave, I developed a strong distrust of private investigators until, as an attorney, I had to hire one for a case. My investigator was a retired police officer, and a stalwart follower of proper procedures. He’d never have roughed up a witness, nor would the majority of investigators.

When I was eight, my brother inherited the Hardy Boys books from a cousin and I read all thirty-two books one summer. I was surprised that the Hardy Boys would often find themselves breaking into houses and buildings to solve crimes, and, later on, as a thirteen-year-old, I appreciated that Agatha Christie was more careful with procedure. Poirot and Miss Marple weren’t the sort to trespass.

After retiring from the practice of law, I started working on a short story that featured Emma Thornton, a young, single-mother-attorney, as the protagonist. I entered the story in the Georgia State Bar Journal’s fiction contest, and, several months later, was very surprised to discover that I had won. This win gave me the confidence I needed to turn the short story into a full novel.

I knew I had a good story to tell. After teaching school for ten years, and practicing law for another thirty-five, I had plenty of war stories. But I was worried about how to keep my writing realistic and still capture the readers’ attention and interest. My protagonist, Emma Thornton, as an attorney and law professor, would spend the majority of her day bogged down in work that is boring, redundant, and even mundane. Lawyers spend more time researching and writing than anything else. They ask the same question to different people over and over in an attempt to get to the truth of the matter. This sort of reality would put readers to sleep quickly.

Lawyers are also bound to follow the rules of ethics or risk disbarment. So, neither Emma nor any person who worked on cases with her could ever threaten a witness, as Perry Mason’s Paul Drake, or become involved in Hardy Boys-like trespass. How could I turn Emma’s routine-filled and occasionally dull life into an exciting book, and still maintain a modicum of (hopefully edgy) realism?

One truth about trial lawyers is that they love a fight, and Emma is no exception. They also love arguing, and asking carefully wrought questions designed to expose the theory of their case. They also love trial. The courtroom is their temple. So, in each of the books in the Thornton Mystery Series, Emma spends the majority of her time preparing for trial, analyzing evidence, interviewing witnesses, and reviewing autopsy reports, and sometimes arguing with the DA. A couple of the books have courtroom hearings. Emma works for a law school where she directs the Homeless Clinic, and has no money for her own investigations. She, and sometimes her students, do the leg work on her cases.

To keep the story interesting, I gave Emma a personality quirk – specifically, an impulse control problem – and an insatiable curiosity. She also carries, to the extreme, the responsibility of zealously representing her clients, all of which suffer from various societal injustices. Emma’s impulse control problem is subtle, and although she’s aware of it, she never addresses the issue. But the reader may notice that Emma can’t resist pushing her apartment door open when it’s been left ajar by someone other than herself, or climbing up the stairs to spy on an intruder. Emma’s exploits often backfire, and she ends up in trouble at least once or twice a book. Impulse control issues would be a problem for any attorney, but that’s especially true when an attorney is conducting his or her own investigations, as Emma.

The term ‘realistic fiction’ sounds like an oxymoron. But it’s nothing more than the creation of imaginary characters and situations that depict the world and society as they are. Plots highlight social or personal problems that mirror contemporary life. The books in my Thornton Mystery Series, Out From Silence, The Redemption, and Sanctuary, are murder mysteries that take a look at societal injustices and family dysfunction, but in a way that takes the reader on a journey. The books are offered as entertainment, but, hopefully, the reader will learn something along the way. 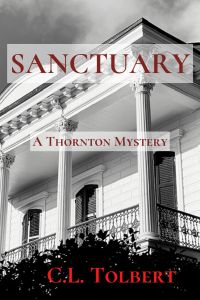 In Sanctuary, the third book in the Thornton Mystery Series, Emma is back again. This time she’s agreed to represent a former client accused of killing the leader of a suspicious cult in New Orleans.

James Crosby, the charismatic leader of the Japaprajnas, is found dead one late afternoon, his body draped over an iron fence in the courtyard of the nineteenth-century house where he and several cult members work and live. Although police initially presumed his fall was an accident, they quickly discover that James received a lethal dose of a drug before he was pushed from his office balcony.

The next day the police discover a syringe and a substantial amount of the drug which killed James in Stacey Robert’s bedroom. The nineteen-year-old cult member is brought in for questioning, which leads to her arrest. Emma, who had represented Stacey when she was a sixteen-year-old runaway, agrees to take the case.

Convinced she is innocent Emma begins an investigation into the cult and its members. Emma’s questions uncover dangerous secrets, illicit activities, and the exploitation of innocent victims. Emma’s suspicions lead her to the killer’s trail and the case’s final resolution.

“Brace yourself. Deadly personalities, hidden agendas, and long-buried secrets threaten law professor Emma Thornton, after she agrees to defend a terrified young woman accused of murdering the charismatic leader of an oppressive cult. The dark heart of New Orleans has never felt so dangerous.”

After winning the Georgia State Bar Journal’s fiction contest in 2010, C.L. Tolbert developed the winning story into a full-scale novel. Out From Silence was published in December of 2019, and is the first novel in the Thornton Mysteries series. Her second book, The Redemption, was published in February of 2021, and Sanctuary, the third book in the series, was published in July of 2022.

Licensed in Mississippi, Louisiana, and Georgia, C.L. practiced law for thirty-five years before retiring to pursue writing. During her legal career, she spent several years teaching at Loyola Law School in New Orleans, where she was the Director of the Homeless Clinic. She also has a Masters of Special Education, and taught in a public school prior to enrolling in law school.

C.L. has two children and three grandchildren, and lives in Atlanta, Georgia with her husband and schnauzer.

Visit these other great hosts on this tour for more great reviews, interviews, guest posts, and giveaway entries!
https://www.linkytools.com/basic_linky_include.aspx?id=307132

This is a giveaway hosted by Partners in Crime Tours for C.L. Tolbert. See the widget for entry terms and conditions. Void where prohibited.