A murder in a quiet English village, long-buried secrets and a man’s search for answers about his traumatic past entangle FBI agents Emma Sharpe and Colin Donovan in the latest edge-of-your-seat Sharpe & Donovan novel

As a young boy, Oliver York witnessed the murder of his wealthy parents in their London apartment. The killers kidnapped him and held him in an isolated Scottish ruin, but he escaped, thwarting their plans for ransom. Now, after thirty years on the run, one of the two men Oliver identified as his tormentors may have surfaced.

Emma Sharpe and Colin Donovan are enjoying the final day of their Irish honeymoon when a break-in at the home of Emma’s grandfather, private art detective Wendell Sharpe, points to Oliver. The Sharpes have a complicated relationship with the likable, reclusive Englishman, an expert in Celtic mythology and international art thief who taunted Wendell for years. Emma and Colin postpone meetings in London with their elite FBI team and head straight to Oliver. But when they arrive at York’s country home, a man is dead and Oliver has vanished.

As the danger mounts, new questions arise about Oliver’s account of his boyhood trauma. Do Emma and Colin dare trust him? With the trail leading beyond Oliver’s small village to Ireland, Scotland and their own turf in the US, the stakes are high, and Emma and Colin must unravel the decades-old tangle of secrets and lies before a killer strikes again.

Emma eased toward an empty carousel, away from the throngs in Heathrow’s crowded baggage claim. She hadn’t expected a call. It was an unknown caller. She almost let it go to voice mail but instead answered with a simple hello, without using her name.

“Dear Emma. Where are you?”

She recognized Oliver York’s voice and slowed her pace. “Heathrow. Did you get my voice mail?”

“This morning. Yes. You and Colin want to see me. Why?”

“We’ll come to you. Are you in London or at your farm?”

Emma went still. His voice was ragged, barely a whisper. This wasn’t the irreverent, relentlessly good-natured Oliver York she knew. “Do what, Oliver?”

“I didn’t kill that man. I tried to help him. I don’t know if it was murder, suicide, an accident. I don’t know anything. Tell the police. They’re looking for me.”

“I’m going dark. I trust you. Trust me. Colin and I will never be friends now.” His attempt to return to his natural cheekiness fell flat. “I hope you two had a fabulous honeymoon.”

She slid her phone into her tote bag and rejoined Colin at their baggage carousel. He’d collected their bags, hers a wheeled case, his a duffel he had slung over his shoulder. They’d packed more than they would have for a typical business trip. They’d put together the meetings at the last minute but were dressed professionally in clothes that had seen them through nights out in Ireland.

She told him about Oliver’s call. “He’s in trouble, Colin.”

“Damn right he is. I just got a call from my MI5 contact. Oliver took off from his farm this morning and left behind a dead body.”

“They don’t know yet. It was a quick call. He wants our help. He’ll pave the way for us to talk to the detectives.” Colin hoisted his bag higher on his shoulder. “Looks as if we’re renting a car and driving to the Cotswolds instead of taking the train into London.”

Emma absorbed the change in plan. She didn’t know Colin’s MI5 contact, just that they’d met during his first undercover mission five years ago. She raised the handle on her bag. Matt Yankowski, their boss in Boston, would want to know she and Colin had landed in the middle of a British death investigation involving Oliver York. “We need to check in with Yank.”

“It’s your art thief on the lam and your grandfather whose house was broken into. If we walked into a bunch of arms traffickers, I’d make the call. I’ll rent the car.” He dipped a hand into her jacket pocket and withdrew her phone, then folded her fingers around it and winked.

“All right. It does make sense that I make the call. I’ll check with my brother at the same time to see if he knows anything about the break-in.”

Colin took the lead as they switched their route and started toward the car rental kiosks. Emma unlocked her phone and hit Yank’s cell phone number. It was early in Boston but Yank picked up on the first ring. “I just had a call from MI5. They know you’re in London and called Oliver York this morning, asked if you have an idea where to find him. Imagine that.”

“We don’t know where he is. Do they know the identity of the dead man?”

“Not yet. Where’s your grandfather?”

“I haven’t been in touch with him since we left Dublin. We stopped to see him on the way to the airport. He was having tea on the terrace.”

“Has Oliver been in touch with him?”

“Will he now that he’s on the run? Those two have an unusual friendship.”

“Anything is possible,” Emma said.

Yank disconnected without further comment. A short conversation. Emma pictured him at his Back Bay apartment with his wife, Lucy, a clinical psychologist who’d opened up a knitting shop on Newbury Street after balking at moving from their home and her work in northern Virginia. As unorthodox and risky as his brainchild, HIT, was, Yank was a straight arrow. Late forties, chiseled good looks, crisp suits and dedicated to the FBI. He’d known what he was getting into when he’d gone after her—an ex-nun and a Sharpe—to join the FBI and then to become a part of his unique team.

She dialed an art-crimes detective she knew at Scotland Yard, and he put her in touch with the detective chief investigator leading the inquiry into the death at Oliver York’s farm. He listened attentively and instructed her and Colin to come straight to the farm when they arrived in the village.

The calls to her grandfather and her older brother, Lucas, who ran Sharpe Fine Art Recovery, were easier. Neither answered. She left voice mails and caught up with Colin. He had the paperwork finished for their rental car. They’d be on the road to the Cotswolds in no time.

“He did not. I wish we’d run in to arms traffickers. They’re more straightforward than Oliver York.”

“But nowhere near as charming.”

A few minutes later, they were on the road, heading west to the rolling hills and classic honey-stone villages of the picturesque Cotswolds. Colin was doing the driving. Emma was preoccupied, thinking about Oliver’s call. “You know this has something to do with the break-in at Granddad’s.”

She was almost surprised when he answered. “Emma,” he said. “You’re in London?”

“Just landed. What are you up to?”

“Contemplating finding a hardware store to fix my broken window.”That didn’t sound suspicious, and there was nothing suspicious about his tone. “Has Oliver York been in touch by any chance?”

“Something’s happened. I’m not sure what I can tell you at this point. Let me know or let the gardai know if Oliver gets in touch. And keep your doors locked.”

“Don’t talk to strangers and drink my milk. Got it.”

“It’s okay. I can tell whatever’s going on is bad.”

“I just want you to stay safe.”

Colin glanced at her after she’d hung up. “First day back on the job,” he said.

She stared out the window at the busy motorway. “It’s going to be a long one.”

Carla Neggers is the New York Times bestselling author of more than 60 novels, including her popular Sharpe and Donovan and Swift River Valley series. Her books have been translated into 24 languages and sold in over 35 countries. A frequent traveler to Ireland, Carla lives with her family in New England. To learn more and to sign up for her newsletter, visit CarlaNeggers.com. 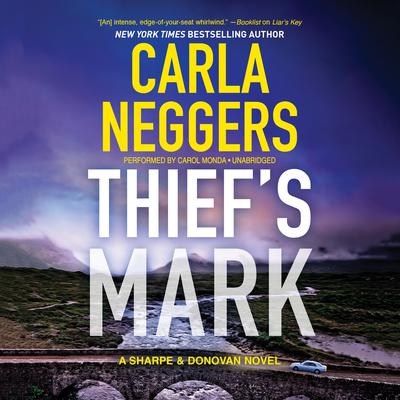