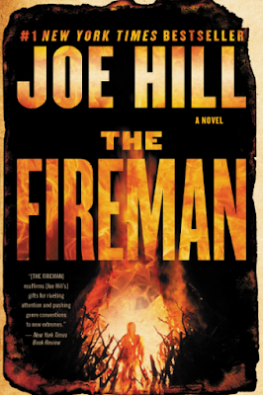 From the award-winning, New York Times bestselling author of NOS4A2 and Heart-Shaped Box comes The Fireman, which was an instant #1 New York Times bestseller when published in hardcover last year. The Fireman is a chilling novel about a worldwide pandemic of spontaneous combustion that threatens to reduce civilization to ashes and a band of improbable heroes who battle to save it, led by one powerful and enigmatic man known as the Fireman.

The fireman is coming. Stay cool.

No one knows exactly when it began or where it originated. A terrifying new plague is spreading like wildfire across the country, striking cities one by one: Boston, Detroit, Seattle. The doctors call it Draco Incendia Trychophyton. To everyone else it’s Dragonscale, a highly contagious, deadly spore that marks its hosts with beautiful black and gold marks across their bodies—before causing them to burst into flames. Millions are infected; blazes erupt everywhere. There is no antidote. No one is safe.

Harper Grayson, a compassionate, dedicated nurse as pragmatic as Mary Poppins, treated hundreds of infected patients before her hospital burned to the ground. Now she’s discovered the telltale gold-flecked marks on her skin. When the outbreak first began, she and her husband, Jakob, had made a pact: they would take matters into their own hands if they became infected. To Jakob’s dismay, Harper wants to live—at least until the fetus she is carrying comes to term. At the hospital, she witnessed infected mothers give birth to healthy babies and believes hers will be fine too. . . if she can live long enough to deliver the child.

Convinced that his do-gooding wife has made him sick, Jakob becomes unhinged, and eventually abandons her as their placid New England community collapses in terror. The chaos gives rise to ruthless Cremation Squads—armed, self-appointed posses roaming the streets and woods to exterminate those who they believe carry the spore. But Harper isn’t as alone as she fears: a mysterious and compelling stranger she briefly met at the hospital, a man in a dirty yellow fire fighter’s jacket, carrying a hooked iron bar, straddles the abyss between insanity and death. Known as The Fireman, he strolls the ruins of New Hampshire, a madman afflicted with Dragonscale who has learned to control the fire within himself, using it as a shield to protect the hunted . . . and as a weapon to avenge the wronged.

In the desperate season to come, as the world burns out of control, Harper must learn the Fireman’s secrets before her life—and that of her unborn child—goes up in smoke.

Harper Willowes Grayson is a mid-twenty-something-year-old school nurse. She’s taken her life lessons from Disney films and uses “what would Mary Poppins do” as one of her guiding mottoes in life. Now that all schools are closed due to Dragonscale, she wants to help in the only way she knows how, but volunteering as a nurse at her beleaguered community hospital. She’s exposed to hundreds of people infected with Dragonscale but wears protection similar to those that had treated Ebola patients. When the hospital catches fire due to several patients bursting into flames, she escapes the hospital and covered in ash returns home to her husband, Jakob Grayson. Grieving the loss of so many lives, Harper finds solace in the company of her husband. Harper had thought she escaped the possibility of infection but awakens the next morning only to find that she too is infected. Her infection throws Jakob off-kilter and he becomes enraged that she has exposed him to this deadly “infection.” A few short weeks later, Harper realizes she’s pregnant. When her husband tries to kill her, Harper realizes she only has one option, escape. Fortunately, she is befriended by a group of infected and taken to a secret camp run by Father Tom Storey. Father Storey uses common-sense wisdom, platitudes, and camp songs to keep the infected in not only good spirits but from combusting. It is at this camp that Harper learns to control the fire that burns within all of the infected. When Father Storey is attacked, Harper is given the mandate to keep him alive or else. With limited supplies and dwindling food, Harper knows she may not be able to fulfill this particular demand. Fearing for her life and the life of her unborn child, Harper latches on to the one person she truly trusts, The Fireman. Can they escape the mob-mentality craziness that seems to be infecting those at the camp, as well as the regional Cremation Squads and make it to safety? Does a safe place for the infected even exist anymore?
The Fireman is definitely not a light-hearted or quick read with over 700 pages, but it is a fast-paced and engaging read that kept my attention from the first page to the very last. There are so many issues being dealt with in this story including an Armageddon-like apocalypse, anarchy, rampant chaos and terror, horrific scenes involving the infected just trying to reach safety but being intercepted and murdered by Cremation Squads, and more. There are bad guys, crazy guys, as well as bad and crazy guys. The world may not be consumed and obliterated by a fantastical disease like Dragonscale, but Mr. Hill has presented a somewhat plausible future where society is destroyed by a rampant infection that simply can’t be controlled. It is easy to imagine the mass hysteria, fall of government infrastructures, and vigilante mentality run amuck in an effort to survive at all costs. I wish I could say I read The Fireman in one sitting (I didn’t want to put the book down at all—sadly I had to set it aside for quite a few hours), but life intervened and it took me a day-and-a-half to finish reading this amazing book. The Fireman is the second book that I’ve read by Mr. Hill (sad to say I couldn’t really get into the first book I read) and now I’m ready to tackle Horns and NOS4A2. If you enjoy reading bone-chilling stories that combine humor and hopefulness with horror and the fantastical (not to mention superior writing), then you’ll definitely want to read The Fireman. If you think you’re not really a horror genre reader, The Fireman will change your mind. Seriously, this was an awesome read and I’m looking forward to rereading it (yes, it was just that good!).

Disclaimer: I was not paid, required, or otherwise obligated to write a positive review. The opinions I have expressed are my own. I am disclosing this in accordance with the Federal Trade Commission’s 16 CFR, Part 255: “Guides Concerning the Use of Endorsements and Testimonials in Advertising.”

Joe Hill is the author of the New York Times bestsellers Horns, Heart-Shaped Box, and NOS4A2. He is also the Eisner Award-winning writer of a six-volume comic book series, Locke & Key. He lives in New Hampshire.

This review and blog tour brought to you by: